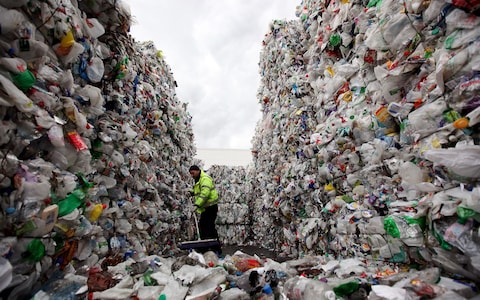 Plastic Bottles Are Filling the Seas and Burying the Planet

We’re drowning in plastic. Every minute, we buy a million plastic bottles. We make 20,000 plastic bottles every second. Fewer than half of those bottles are recycled and just 7 percent are turned into new bottles. Most of that plastic ends up in landfills or contributes to the growing garbage patches in the sea. According to The Ocean Cleanup project, the Great Pacific Garbage Patch now covers 1.6 million square kilometers and contains 1.8 trillion pieces of plastic. The north Atlantic has its own floating patch of plastic garbage that stretches over hundreds of kilometers.

That plastic waste isn’t just unsightly. It’s also dangerous. Plastic particles are eaten by seabirds and also by fish which make their way into the human food chain. The European Food Safety Authority has called for urgent research into the effects of plastics on human health and food safety.

In October 2018, the European Parliament adopted plans to ban single-use plastic items such as plates, cutlery, and cotton buds. Other plastics, including drinks bottles, must be collected separately and recycled at a rate of 90% by 2025.

The regulations impose a heavy burden on local municipalities. One way to lighten this burden will be to reduce the number of plastic bottles that need collecting and recycling.

Urban Springs Refill stations will help cities to comply with these new regulations and keep their streets—and the oceans—clean.

Read more about our refill stations

More than 70% of the plastic ends up on the seafloor.

We’re here to stop that.